For the sixth consecutive month, The Eastern Iowa Airport (CID) has set a new passenger record.

The year-to-date increase for enplaned passengers – those who board a plane at CID – is up 4.7 percent over the same time in 2017.

In addition, the amount of enplaned cargo at CID for the period of January through July is up 20.5 percent versus the same time period as last year.

Marty Lenss, CID airport director, says passenger traffic continues to increase due, in part, to the number of options provided.

“We have five great airline partners that offer nonstop flights to key connecting hubs that are vital to business travelers,” he says. “For leisure travelers, we have ultra low-cost carriers that provide affordable flights to popular vacation destinations.”

The capacity – or number of seats available – has increased 14 percent in the past five years, giving passengers more opportunities to choose CID.

“We’ve said it before, but it bears repeating,” Lenss says. “The airlines are investing in our market because passengers are filling their seats. Air service has always been a very competitive business, but with airline consolidation and the pilot shortage having a real impact on communities, it is even more important now to show our airline partners that CID has a strong market.”

“Part of the data we collect helps to show us where travelers are coming from,” he says. “We can see people beyond our immediate area are choosing CID.”

Based on passenger numbers, CID carries 30 percent of the state’s commercial air passengers.

One of the tools used by the airport is a “heat map” that documents a license plate count conducted regularly by the airport’s parking contractor, Republic Parking. The map below shows the counts from July 1, 2017 through June 30, 2018. 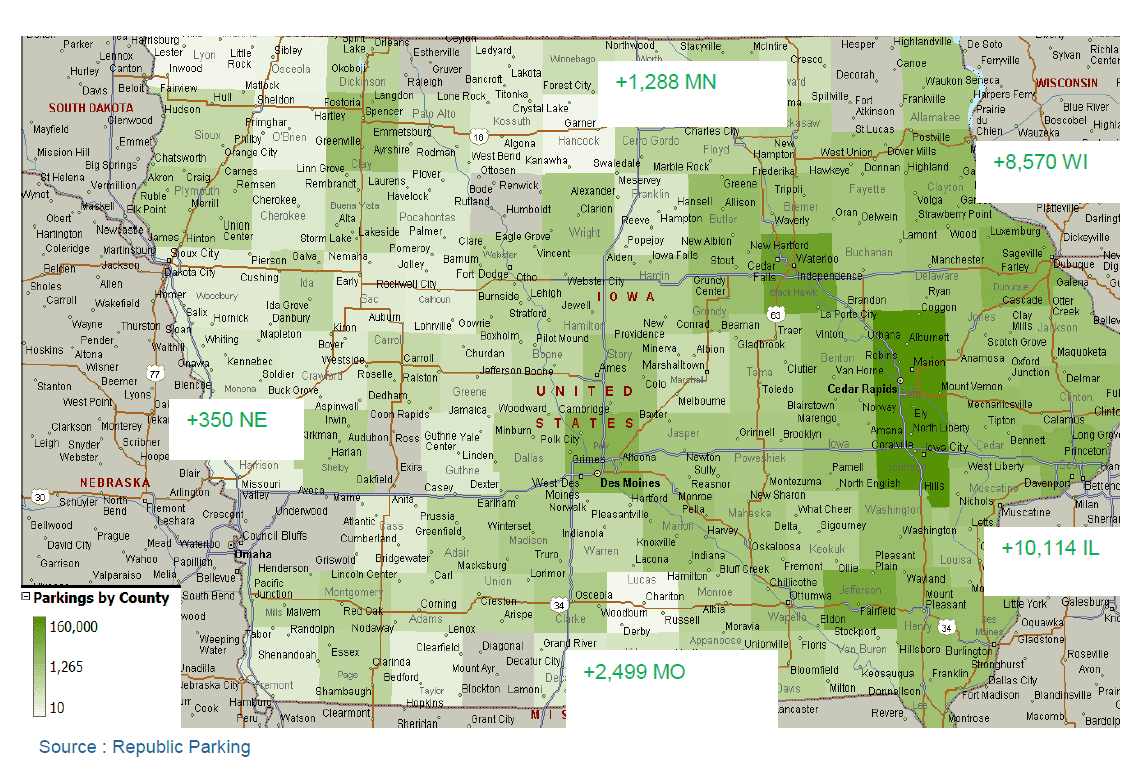 Lenss says the diverse and thriving economy in the Cedar Rapids/Iowa City region is also key to the airport’s success. “The airport can’t grow if businesses aren’t growing,” he says.

Another indicator the region’s economy is doing well is the large increase in cargo traffic, Lenss says.

“CID is now handling 45 percent of the entire state’s cargo traffic,” he says. “We have seen our numbers increase as the demand for overnight delivery has increased nationwide.”

Airport officials have discussed expanding the cargo footprint at CID to help accommodate the surge in cargo traffic.

“Larger aircraft is being used not only for commercial passenger traffic, but also for air cargo and we need to ensure carriers we are providing the best facility possible for them to efficiently deliver freight,” Lenss says.